With Better Targeting, Alcohol Brands Bet Big on Digital Annual budgets increase as much as 50 percent 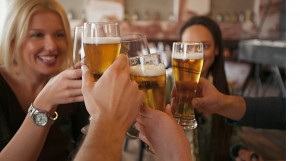 Alcohol brands are stepping up their digital marketing.

For years, beer and spirits brands steered clear of digital marketing and social media because of challenges in making sure posts do not break strict regulations by pitching underage consumers. But with Facebook and Twitter offering more sophisticated age targeting, brands can now, more or less, rest assured they are hitting the 21-and-over set.

What’s more, alcohol marketers can argue that the social platforms’ targeting and data can be more effective than traditional marketing. And brands like Patrón and Pernod Ricard have increased their budgets by double-digit percentages during 2015.

Newcastle Brown Ale has been ahead of the curve for a couple of years. This week, the beer will launch its fourth all-digital campaign since eliminating traditional advertising during 2014’s fake Super Bowl spot with Anna Kendrick.

But unlike its previous efforts, the brand isn’t just building online buzz with celebrities. Instead, it wants to turn funny viral videos into actual sales.

“It’s more of a test and learn to say, ‘OK, now that we’ve got that awareness and got people laughing and loving the brand, can we shift the message back to the product and still have the same effect?'” said Priscilla Dohnert, brand director for Newcastle. “That way, we shift from just building equity to actually driving trial.”

The campaign, which will be heavily promoted on Facebook, includes two videos poking fun at criticism that the beer is bitter. In the past, sponsored posts have targeted Facebook users nationally, but this summer, the brand is loading up on ads in key California markets and in Las Vegas.

The English beer brand is then layering on sponsored Facebook posts linking to coupons and offers on its website. As the campaign rolls out, Newcastle may change the creative for specific markets. For example, if an area of the country doesn’t sell bottles of Newcastle, the ad will show a picture of cans.

“We can see how many are we actually converting,” Dohnert said. “It’s a big shift in approach from mass to marketing to more targeted.”

Yesterday, Heineken launched its summer campaign “Open Your City,” with 25 percent of its spending going toward digital.

The beer brand is teaming up with musician and former LCD Soundsystem front man James Murphy to support his “Subway Symphony” project. Murphy’s goal is to turn the small beeping noises that turnstiles in New York subway stations make into a piece of music that passersby can listen to.

To help get Murphy’s project off the ground, Heineken is making a four-part documentary series that includes 30- and 60-second online video ads. “The basic goal for digital is that we want to scale local,” said Quinn Kilbury, senior brand director at Heineken.

Similar to Newcastle, Heineken is leaning on its partnership with programmatic video player Tubemogul and social platforms like Facebook and Twitter this summer to build mini profiles of users to target its ads against. “You put psychographics on top of demographics to make sure that you’re getting the right people,” Kilbury explained.

The subway-music project is limited to New York, but Heineken’s goal is to use the same tactic in other cities. “Our aspirations are to do lots of projects and things at the same time and to amplify those, digitally.”

Even as liquor advertisers increase their digital efforts, Patrón’s global CMO Lee Applbaum acknowledged that the shift has been a slow one for his company, partly because it’s been hard until recently to find ways to plug alcohol brands with long histories into social media.

For instance, Patrón has 3.4 million Facebook fans and 213,000 Twitter followers, but Applbaum pointed out its more successful, recent work with virtual reality and livestreaming platforms like Meerkat and Periscope.

On Periscope, the brand has given viewers behind-the-scenes looks at events. It also recently built a virtual reality experience to show people how its products are made.

Applbaum added that Patrón’s digital spend for 2015 is up 30 percent in the last year.

“Eighteen months ago, we had no digital or social practice in this business,” he said. “Since that time, we’ve built a digital and social practice internally, and we have partners like Razorfish and Golin helping us lead that in the U.S.”

Similarly, Pernod Ricard hired 360i last fall to up its digital game for brands including Absolut Vodka, Jameson Irish Whiskey and Malibu Rum.

Andre Marciano, director of media and integrated communication at Pernod Ricard, said the company has increased its digital budget by more than 50 percent every year for the past few years, but it’s only started putting paid ads against its social posts in the last year.

“The ad products themselves that Facebook and others have put forward help our industry in terms of compliance,” he said.

Smaller liquor brands are zeroing in on location targeting, too. Later this summer, agency Edge Collective will run an all-digital campaign to launch a new spirits brand, Made Real Vodka, in New York with geo-targeted ads. With the work, Edge Collective’s co-founder Magnus Erhardt expects to double his shop’s alcohol and liquor business this year.

Meanwhile, InMarket, a platform that helps retailers and brands set up beacon campaigns in stores, reports that spirits brands have increased their spends 200 percent since 2014. The beacons also lifted purchase intent for alcohol and liquor brands by 16 times, according to 12,000 survey responses InMarket collected from people who interacted with the beacons.

“The demand and interest that we’re seeing from things we’re doing [for other clients]-which is proximity marketing, virtual reality and augmented reality-is basically anything alcohol brands are interested in,” Erhardt said.