Wine in kegs is an Idea Barreling into more Restaurants 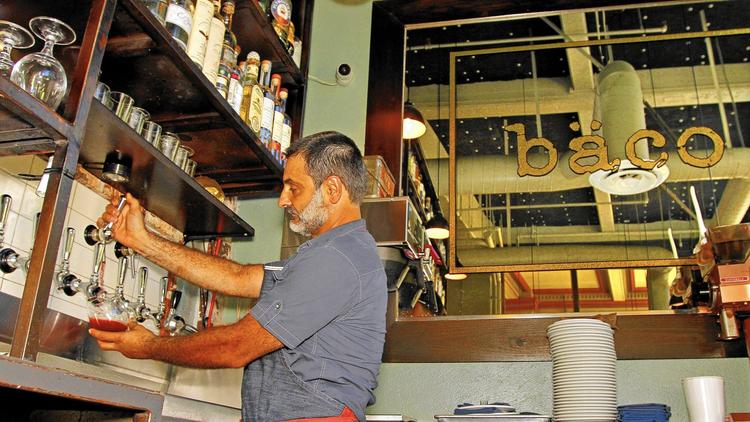 Part of the ritual of wine drinking is opening the bottle, teasing the cork from the bottle and pouring that wine into a crystal glass. That’s no longer the default, though. First, they came out with fake corks, then screw cap bottles – and, sacre bleu, now some serious restaurants are dispensing wines from kegs.

And we’re not talking about jug wine. A growing number of boutique wineries are putting their Chardonnay, Pinot Noir and Rhone-style reds in kegs. Wineries like Lioco, Brewer-Clifton, Matthiasson, Tablas Creek, Melville, Au Bon Climat, Copain and even Scholium Project.

Why? Putting wine in kegs saves the winery the costs of bottling and labeling – and shipping – 26 bottles of wine (on average, about $2 per bottle). It also saves them recycling all those bottles, so it’s more sustainable environmentally. For restaurants, wine on tap eliminates anticipated waste in their wine-by-the-glass program. Every glass should taste as fresh as the first pour from a bottle. And because their cost is lower, restaurants can pass that savings on to the customer and offer better wine at a lower price.

The idea is nothing new in Europe, where you can routinely go to bars or wine depots and fill up empty bottles with the inexpensive local wine. But it’s hard to imagine a cru Bourgeois Bordeaux or a Super Tuscan being dispensed from a keg there. That’s where American wineries and restaurateurs are leading the way.

Sang Yoon of Father’s Office saw the possibility early on in the late ’90s. Then chef at Michael’s, on a visit to Brewer-Clifton he saw a metal keg in the cellar there. Greg Brewer told him it held wine used to top up low-filled bottles. So wine could live in a keg and be perfectly fine? Yoon stored that little nugget away, and when he was about to open his second Father’s Office in Culver City in 2007, he revisited the idea.

Yes, you could put wine in a keg. But there was no standard way to get the wine from the keg to the glass. Yoon had to figure it out pretty much from scratch. Obsessed with the idea, he conducted experiments for more than a year. The weak point was the tubing. After repeated experiments turned up nothing satisfactory, he was about to give the idea up until someone suggested medical-quality tubing used to plumb dialysis machines. Bingo. Zero oxygen infiltration. Not a trace of off-flavor, even when he kept wine in a keg for a year.

There are several companies in the business of supplying kegs of wine to restaurants. Free Flow Wines started out in 2009 with the idea of selling bulk, high-quality wine in kegs to restaurants. But says co-founder Jordan Kivelstadt, they soon found that restaurateurs preferred known labels, so now the company deals in wines from Trefethen, Frog’s Leap, Lioco, Copain and more. In all, they have 75,000 kegs of about 440 wines in circulation.

Not everybody is convinced. At Barbrix in Silver Lake, Claudio Blotta serves 50 to 60 wines by the glass, none of them from a keg. He feels the taste is not the same as from a bottle. “Wine is not beer, and it should not be treated the same way.”

Tom Hunter of Revel Wine, a broker of small-production wines with an emphasis on organic and biodynamic vineyards, says kegs are now about 5% of his business. He credits Yoon as not only the first to do wine in the keg but also as having designed one of the best systems.

Now that even beer-centric places are dedicating a couple of taps to wine, Hunter encourages them to upgrade instead of serving the wine equivalent of Budweiser. Revel’s winery clients include such small-scale, high-quality producers as Alta Maria and Giornata on the Central Coast, and Cultivar and Matthiasson in Napa.

David Rosoff, former general manager of Osteria Mozza, loves what wine on tap has done for people’s attitude toward wine. “It’s finally got people to think about wine in the same way as beer. They don’t get themselves wound up with angst and insecurity when they go to drink beer in the same way they do about wine. It levels the playing field.”