A Vodka With a Twist of Tort 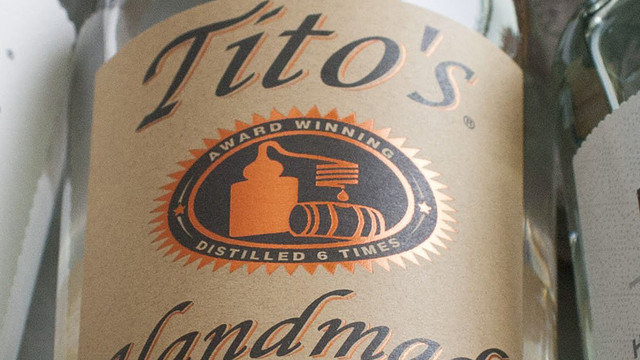 Is Tito ‘s Handmade Vodka really handmade? Would it taste any less good if it weren’t anymore?

Type “handmade vodka” into Google and the first two pages of results are about one brand: Tito’s Handmade Vodka from Austin, Texas. You could say the “handmade” descriptive is essential to its identity, along with small-batch, craft-distilled, folksy even. The ads and website images show founder Bert “Tito” Beveridge in jeans and a button-down, standing proudly next to his potstill, sitting atop cases of his product, or beside his faithful dogs. On the label, aside from “handmade,” are the words “Crafted in an Old Fashioned Pot Still by America’s Original Microdistillery.”

But in the summer of 2013, Forbes published “The Troubling Success Of Tito’s Handmade Vodka.” As its author Meghan Casserly explains, “Tito’s has exploded from a 16-gallon pot still in 1997 to a 26-acre operation that produced 850,000 cases last year, up 46 percent from 2011, pulling in an estimated $85 million in revenue.” She also describes “massive buildings containing ten floor-to-ceiling stills and bottling 500 cases an hour.”

So it was inevitable: On Sept. 15, lawyers representing Gary Hofmann in California filed a class-action lawsuit, alleging that Tito’s “manufactured, marketed, and/or sold . . . ‘Tito’s Handmade’ Vodka to the California general public with the false representation that the Vodka was ‘handmade’ when, in actuality, the Vodka is made via a highly-mechanized process that is devoid of human hands.”

On Sept. 25, attorneys representing Shalinus Pye and Raisha Licht in Florida filed a similar class-action complaint: “Plaintiffs believed at the time they purchased the Vodka that they were in fact buying a high-quality product made by human hands that was not made in large industrial vats in mass quantities, etc.”

Not much is known about these plaintiffs, other than that they enjoy drinking vodka. It is unclear if they have a history of litigiousness-will they set their sights on Pepperidge Farm cookies for not being baked on a farm?

While reporting for my recent book on the booming vodka market in the U.S., I met with Tito Beveridge at his distillery 14 miles southeast of downtown Austin. It’s surrounded by brown hills and scrub brush and, with its barbed-wire fencing and 24-hour armed guard, looks more like an ICBM site. The security perimeter was erected to prevent copper theft from methheads and the like.

After visiting the smaller, original still house, Tito (dressed in a button-down shirt, jeans and boots) walked me over to the main warehouse where the bottling takes place. It’s enormous, though larger operations exist (for instance, at Smirnoff in Plainfield, Ill.). Although machines do much of the work, the assembly lines are still manned by employees. At the time of my visit, one woman had the tiresome job of placing paper collars around the neck of every single bottle. Other workers drove forklifts, whereas at Ketel One in Holland, much of the work, such as forklifting and shipping, is done robotically (a marvel to behold, by the way).

In the Florida class-action complaint, lawyers cite the Alcohol and Tobacco Tax and Trade Bureau’s prohibition of false advertising and labeling. But the bureau does not provide precise wording to define “handmade.” Both lawsuits rely on the Oxford definition: “made by hand, not by machine, and typically therefore of superior quality.” But what exactly is typical about making vodka?

The plaintiffs note that Tito’s vodka begins as a neutral grain spirit trucked in from a contract manufacturer in Iowa, which they allege means it cannot be homemade. But at least 65% of all vodkas made in the U.S. originate at contract manufacturing sites-essentially ethanol plants. The local distiller then runs the spirit through its own smaller stills, adding trace ingredients to make the final product somewhat more distinctive. According to the government, a distillery needs to run the neutral grain spirit through its still only once to have “distilled and bottled” on the label. The brand can brag about being distilled five times. It just turns out the first four times took place in Iowa.

As for pricing, the Florida lawsuit explains, “Consumers generally believe that ‘handmade’ products are of higher quality than their non-handmade counterparts, and are produced in small batches by hand. Due to Defendants’ scheme to defraud the market, members of the general public were fraudulently induced to purchase Defendants’ Vodka at inflated prices.”

Really? I’ve sampled more than a few “handmade” vodkas that weren’t “of higher quality” than their industrial counterparts. Relative to other vodkas, Tito’s isn’t that expensive, either. At the liquor store near my office, a liter of Tito’s costs $24.99, whereas a liter of Grey Goose costs $44.99. Affordability was one of Tito’s main selling points. As the founder told me, “I always looked at it like a filet mignon at a pot roast price.”

During my tour, Tito handed me a test-tube sample, room temperature, straight from the still. It was amazingly smooth. Clearly, plaintiffs Hoffman, Pye and Licht could have done worse-cheaper brands sometimes contain propylene glycol, which is found in antifreeze. Meanwhile, smaller craft vodkas like Boyd & Blair would have cost them more.

Whatever happens in this case in terms of the plaintiffs and their attorneys cashing out, it is possible that the label of “handmade” may not be on Tito’s after the dust settles. Consider that Red Bull recently agreed to a multimillion-dollar settlement after plaintiffs challenged the energy drink’s boast that it “gives you wings.” It turns out that one can of Red Bull has the caffeine equivalent of a cup of coffee (also, nobody sprouted wings).

But businesses adapt. Maurice Kanbar was informed by the government that he could no longer tout his SKYY vodka as being hangover-free. Yet SKYY continues to thrive. And at this point, I doubt if anyone would notice if “handmade” were missing from Tito’s now-familiar brown label-a label Tito Beveridge himself used to paste onto each bottle with Elmer’s glue. He also screwed on every cap to the point of getting carpal-tunnel syndrome. Alone, he could crank out 65 cases a day. This was back in the 1990s, when he was sleeping on the floor, next to his still, doing every little thing, well, by hand.