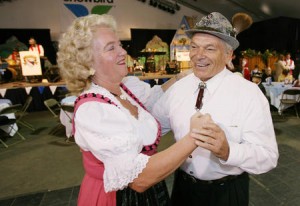 Community events that offer alcohol such as Snowbird’s annual Oktoberfest will face tighter scrutiny from the state liquor commission in the future.

The seven-member panel is reviewing Utah Department of Alcoholic Beverage Control criteria for single-event permits and could make it more difficult for money-making enterprises to hold a weekend festival or evening gala.

Commission Chairman David Gladwell said the panel is trying to decide whether the legislative rules are meant more for charitable organizations or those who don’t have liquor licenses to hold a community event and serve alcohol.

“We just felt that maybe we were allowing something that the Legislature had not intended. We didn’t get any direction from the Legislature,” he said, noting several of the commissioners are new. “We felt like previous commissions had drifted from the rules that we had imposed upon ourselves.”

The issue came to the forefront Tuesday when the commission debated whether to grant Snowbird a permit for its sixth annual Brewfest scheduled for June 14-15. The Father’s Day weekend event features local and out-of-state breweries and live music.

Snowbird general manager Bob Bonar told commissioners he learned only two weeks ago that the policies were changing. He argued that the festival meets the broad requirements for the permit regardless of whether it makes money.

The commission approved the permit but signaled that things would tighten up in the future, which could impact events such as Snowbird’s nearly 40-year-old Oktoberfest. Held over several weekends from August to October, it draws thousands of people celebrating German food, music and dance.

Bonar said he’s confident the resort can work out a way to hold the event despite the commission’s change in direction.

Commissioners, though, have yet to reach agreement themselves on how to interpret the rules.

“We are not of one mind right now,” Gladwell, said adding the commission could call on state lawmakers to clarify the rules. “The commission is somewhat divided. This is a policy in progress.”

Gladwell said changes would not affect charitable organizations or governmental entities that want to hold events and serve alcohol. The Utah State Fair, Greek Festival and Utah Arts Festival have already received permits for this year.