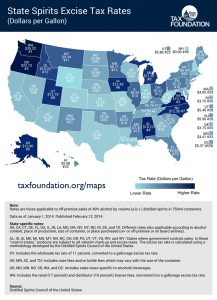 Two years ago, Washington residents voted to end the state’s monopoly on liquor sales. In one of the most expensive campaigns ever waged, retailers pumped tens of millions of dollars into convincing voters that private sales would benefit them more than leaving sales in the hands of the state.

Now, however, Washington state residents pay more for a liter of alcohol than residents in any other state. And though the initiative promised to fill the tax hole left by the absence of a monopoly, Washingtonians are spending less on liquor than the state had projected.

The Seattle Times reported over the weekend that the average cost of a liter of liquor, after tax, stands at $24.39, up from $21.19 before privatization took effect. The Tax Foundation found Washingtonians pay $35.22 per gallon of spirits, $8.52 more than before privatization and by far the highest in the nation. (Oregon, the state with the second-highest taxes on spirits, pays $22.73 per gallon.)

There’s a political angle to the new taxes, as well: The added fees were supposed to make the initiative revenue-neutral, by replacing the revenue the state would lose with the end of its monopoly.

“The whole point of privatization is increased choice, increased flexibility, increased availability of different products,” said Scott Drenkard, an economist at The Tax Foundation. “But if you raise taxes like they did in Washington, to try to sweeten the pot and make it a vote-getter, you’re going to run into problems.”

The initiative sponsors “wanted to make it a win-win-win-win,” Drenkard said. “The losers were consumers.”

According to tax receipts, the state isn’t doing much better. Revenue generated from liquor sales spiked in the first full year the initiative took effect, to $521 million, up more than $70 million from the year before. But much of that money came from one-time fees, totaling more than $100 million. This year, the state had collected $369 million in revenue through the end of May, 11 months into the fiscal year, which ends today.

State forecasters had expected revenues of $402 million to $480 million over the first six years of privatization. Those revenues may drop further: The 10 percent tax paid by distributors will be cut in half starting this year.

Liquor privatization advocates point to one area where progress is undeniable: The number of stores at which Washingtonians can buy their booze has skyrocketed, from 329 state-owned or -operated stores to more than 1,400. Costco, the mega retailer that put so many millions into the privatization campaign, has been one of the biggest winners; the Seattle-based chain now controls about 10 percent of the liquor market in Washington.

Other states considering privatization should take note of the fallout Washington is experiencing, Drenkard said. At 12 liquor stores just over the state line in Oregon, sales were up 30 percent in the third quarter of last year. Supporters of liquor privatization were gathering signatures for a ballot initiative in Oregon, though the state Supreme Court ruled in May that their ballot language didn’t meet requirements.