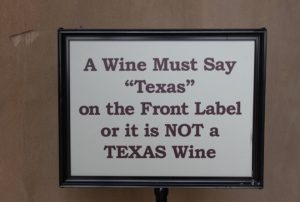 The TTB has proposed new wine labeling regulations that are aimed to protect Texas wineries.  The proposal acts a response to the large number of FSITO wines that have been taking business to out-of-state suppliers.  The underlying changes of the deal are the prohibition of the use of vintage date labeling on wine made from non-Texas grapes and the forbidding of grape variety statements.  In an effort to support Texas’s local economy, the TTB’s proposal would force FSITO wines to “be sold as just generic red or white table wine, the lowest grade on the quality scale.”  This potential adjustment in legal framework is being backed by every member of the California congressional delegation, so the chances of approval have drastically increased.  The event has also naturally brought the issue of FSITO wines to the forefront of the industry.