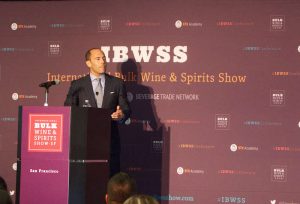 Close to 1500 wineries, distilleries, importers, distributors and retailers met in San Francisco for the debut of the highly anticipated International Bulk Wine & Spirits Show on July 26 & 27. At the event, suppliers and buyers traded and attendees learned about the latest trends in bulk wine and spirits, including methods to use private labels as a way to win over customers, boost loyalty and drive new sources of revenue.

The event saw unprecedented success with most exhibitors walking away with deals or potential contacts with buyers. Exhibitors had the chance to meet buyers from Gallo wines, Trader Joe’s, Kroger’s, Bevmo amongst many others. Buyers came from all over the United States and were not limited to the vicinity of the Californian wine industry.

Gary Aganjanian from Agajanian Vineyards and Wine company mentioned that “the buyers that they have met at IBWSS knew exactly what they wanted and they came with a precise need, It was great talking to them.”

The list of exhibitors at the IBWSS included some of the biggest names in the industry, including Allied Grape Growers, Bulk Wine Centre, Delicato Family Vineyards, JF Hillebrand USA, Terressentia Corporation and The Ciatti Company. Notably, exhibitors came from all over the world, not just the United States.

“Our focus from the outset was to make this a truly global event, bringing in the biggest names in the wine industry from all over the world,” said Sid Patel of the Beverage Trade Network, the organizers of the event. “Right now, the IBWSS is the only show of its kind in the United States.”

Not only did participants have the chance to connect with prominent contract manufacturers and bulk wine suppliers, they also had a chance to develop relationships with key decision-makers who will impact the future trajectory of the industry.

Many of these decision-makers within the wine and spirits industry gave presentations at the two-day event, in which they covered the major trends and ideas that are influencing the future growth of the bulk wine and private label market. They also took time to debunk some of the myths and misconceptions that may have slowed the initial growth of the bulk and private label wine market in the United States. For example, it is not always price and excess stock that are the driving forces to trade bulk wine.

The IBWSS included a full two-day slate of presentations, workshops, master classes and networking sessions. On Day 1 of the event, wine industry journalist Deborah Parker Wong kicked things off by explaining how to develop and deliver a successful bulk wine program. She explained the role of different players that make up and influence this industry, quoting Denys Hornabrook to say that the “Global bulk market is becoming more fluid.”

She was followed by Lewis Perdue of Wine Industry Insight, who gave a detailed talk on how to make online advertising for private label wines pay off. “You may think you are selling to the masses, but you will miss the target if you don’t ‘narrowcast’”, he explained. Steve Fredericks, President of Turrentine Brokerage, analyzed the factors to consider when buying bulk wines, talking about the effect of cycles on the bulk market. Summarizing the role of brokerage firms in the bulk market, he mentioned that “Just because you know the price doesn’t mean you know the market.”

Tim Hanni in his talk presented the Product Opportunity Matrix and explained how different flavour preferences are valued by a different consumer mix.

And later on Day 1, Nat DiBuduo, President of Allied Grape Growers, highlighted how current grape supply and demand impacts the broader wine market using the example of Pinot Grigio. When mentioning the $10-$20/bottle market segment, he emphasized that “This is the hottest, sizeable price segment presented today.”

Day 2 of the event focused more specifically on the finer points of building a bulk wine business. Earl Hewlette, CEO of Terressentia Corporation, explained how participants could optimize their revenues by selling bulk and private label spirits. That was followed by a presentation by Chris Mehringer, President of Park Street, who explained how spirits companies could start a new brand even without a distillery, an approach that he referred to as an “asset-light” strategy. And Bob Paulinski MW, Head of Sourcing Wine at Coles Liquor Group, Australia explained how retailers and restaurants could grow their own private label brands.

For participants of IBWSS who wanted to follow up on those ideas after the event, there were plenty of chances to get hands-on insights by attending workshops and master classes. For example, on Day 1 Steve Burch of Radoux USA led a workshop designed to lead participants to uncover new opportunities in the bulk spirits industry. Later, on Day 2, Tim Hanni MW discussed the changing nature of consumer tastes, and how to deliver exactly what consumers wanted. “Love the wine you drink,” he told participants.

One theme that emerged at the IBWSS event was the global nature of the private label and bulk wine industry. It was also clearly demonstrated that there is a growing demand in the bulk and private label industry in the United States, this year’s IBWSS event provided plenty of opportunities for attendees to learn more about this exciting trend and how to get involved.

On Day 2 of the event, for example, wine industry professional Jeff Hansen of AH Wines led a workshop on sourcing and creating wines for the Chinese market. Hansen offered simple advice for winemakers: “Sell it first, produce it second.” And, on Day 1, Gordon Burns of ETS Laboratories led a workshop on international trade, focusing on the role of certificates of analysis (COA). As Burns suggested, these COAs may seem a bit daunting to the outsider trying to crack a new market, but they should not be a reason to put aside global expansion.

In addition to all the activity that was taking place in the main exhibition hall and the workshop sessions, there was also plenty of time for participants to network with each other and discover potential partnership opportunities. “We fully expect participants to walk away from this event with real trade deals,” said Sid Patel of Beverage Trade Network.

To learn more about Park Street and how you can help you implement an “asset-light” strategy within the current marketplace, please contact us.