Mezcal Vies with Tequila for Bigger Share of Drink Market 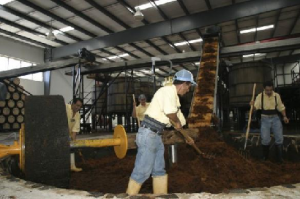 Mezcal, Mexico’s oldest smoky spirit, has been gaining in popularity globally, and its much bigger cousin, tequila, has taken notice, with one big corporate brand returning to a centuries-old method of production.

Both drinks are made from agaves, cacti that are also known as magueys. But at least 51 percent of tequila must consist of steamed blue agave, while mezcal can be made from any variety and is roasted.

Tequila production is also much larger at about 200 bottles for each one of mezcal, according to Mexican government data.

“It is the roasting that gives mezcal its smokiness,” said Elisandro Gonzalez-Molina, a co-founder of the company Mezcal Tosba. “And each type of agave will give you a different flavor.”

Along with his cousin, Edgar, Gonzalez-Molina is crafting Mezcal Tosba, a small batch mezcal made in the Sierra Norte region of Mexico, about 90 miles (150 km) northeast of Oaxaca City.

Gonzalez-Molina is typical of the more than 8,000 mezcal producers who make the drink much as their ancestors did 500 years ago, with natural fermentation and a huge stone, or tahona, that can weigh up to 4 tons and is pulled by mules or tractors to crush the agave.

“Tequila has been made in large productions, and it is very industrial,” Gonzalez-Molina explained. “Mezcal is artisanal.”

But some tequila producers are reverting back to the older methods. Patron, one of the largest tequila makers, is increasing its use of the tahona for its Patron Roca brand, which sells for $70 to $90 per bottle.

Mezcal prices range from $30 to $75 a bottle, depending on the blend, age and brand.

Patron is trying to capitalize on rising demand for tequila, especially the higher-priced categories. Sales have more than doubled over the past decade topping $2 billion in 2013, according to the Distilled Spirits Council of the United States, a Washington, D.C.-based trade group.

“The handcrafting of this tequila begins with the stone,” he said. “The rock has to be volcanic stone because of the strength needed to break down the fibers.”

Some tequila producers have always used the tahona and never adopted the more modern shredding mills and presses, stainless fermentation tanks and stills.

The main distiller for El Tesoro tequila, Carlos Christian Camarena, said the tahona stone he uses at his family’s distillery is only the second since it opened in 1937 in Jalisco.

But rather than using mules, his father decided about 35 years ago that a small tractor would be better for pulling the new stone.

“So, we are mechanized now,” he joked.