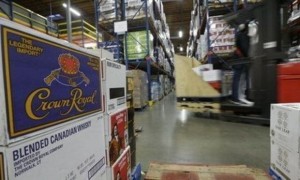 Liquor privatization supporters have dropped initiatives to put a measure on the November 2014 ballot to privatize sales and allow big Oregon grocery chains to stock liquor on their shelves.

The announcement Wednesday came after months of legal debate over the ballot wording of two possible initiatives. While one was stuck before the Oregon Supreme Court, supporters had recently gotten the nod to start gathering signatures on a second, less preferred initiative.

Just last week, supporters said they would move forward with that initiative. But privatization backers, who call themselves Oregonians for Competition, ultimately decided the first initiative was the strongest and the turnaround too tight to gather enough signatures for that one, with a July 3 deadline looming.

“Faced with the actual choice between two (initiatives,) they would rather step down and wait,” said Pat McCormick, spokesman for the group.

“We still believe Oregonians are ready to end our state’s prohibition-era monopoly on liquor sales and allow Oregon consumers to buy liquor at qualified grocery and retail stores – just like consumers do in most other states,” said Lynn Gust, division president of Portland-based Fred Meyer Stores, in a statement.

It’s a win for opponents of the measure who said privatization would lead to a jump in prices and fewer choices for consumers.

Paul Romain and Danelle Romain, with the Oregon Beer & Wine Distributors Association, said the news was welcome and “not a surprise” in a statement.

“This was a solution in search of a problem to benefit big grocers – and with it over we can turn our attention back to creating economic opportunities that help our craft distillers, brewers and wine growers continue to grow and succeed,” they said.

Privatization backers want to allow retail stores with more than 10,000 square feet to be able to stock and sell liquor.