Hop Prices Soar as US Craft Beer Boom Takes Off 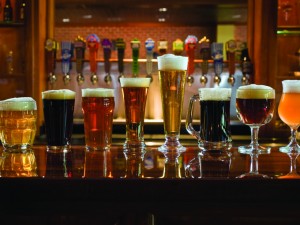 A cool craft beer has become part of the uniform for self-respecting hipsters from Brooklyn in New York to the London borough of Hackney. Now the craze for the microbrews made by small independent brewers has led to a scramble for hops, the key ingredient used to add flavour and bitterness.

In the US, where the current craze was born, the $14bn craft beer industry has seen annual double-digit production growth over the past few years. This has doubled the price of the specialist aroma and flavour hops favoured by craft brewers to about $7 to $10 a pound over the past five years – the highest since 2007-08 when the market was hit by a severe drought.

Craft beers use between four to 10 times more hops than the average lager produced by multinational beer companies and are often described as “hop bombs”.

“I’ve been buying hops for 30 years. It’s more challenging now than just about any time in my career,” says Steve Dresler, brewmaster at California-based Sierra Nevada, a leading craft brewer started by homebrewers in the late 1970s.

Appetite for new beers pushed the total number of US craft breweries to 2,768 last year, a 15 per cent jump on 2012. Their brews now account for almost 8 per cent of the total US beer market.

The popularity of their craft beers has spread to the UK, continental Europe and Japan, as well as emerging markets, and there is increasingly intense competition for hop crops around the world.

“[Craft brewing] is like a pandemic that’s spreading everywhere. Even China has 1,000 craft brewers,” says Alex Barth of the Barth-Haas Group, a leading hop trader headquartered in Germany.

Of the various craft beers, the India Pale Ale, known for its strong hop flavours, is the best-selling style. Dating back to the 19th century, IPAs were originally brewed by the British, but the new craft brewers are bringing out new beers with more distinctive flavours.

The high growth rates of the craft brewing industry and the large amounts of hops needed means that hop growers have hardly managed to produce enough to meet demand. Sean McGree, hops manager at BSG CraftBrewing, a US supplier of beer ingredients, says: “It’s been a struggle for the hop industry to keep up with the new demand.”

Ironically, surging demand for craft beers stands to hurt microbrewers the most. Low levels of hop inventories make it difficult for the small players to procure extra crops because they do not have forward contracts with growers. If a brewer’s new beer is a sudden hit, they will find it almost impossible to cover their unexpected hop needs, say industry executives.

Mr Dresler says when Sierra Nevada launched its signature beer Torpedo Extra IPA in 2009, sales soared by an annual rate of 50 to 60 per cent, leading to a scramble for hops. “I could only sell a limited amount of barrels [of Torpedo Extra] per week until I could secure some more hops,” he says.

The real crunch for craft brewers could come as early as next year when large multinational beer companies looking to replenish their hop inventories start negotiating with the growers. “The next couple of years will be interesting as brewers compete for what’s being sold and what’s being grown,” says Mr Dresler.

In the US, there are only about 35 to 40 farmers in Washington, Oregon and Idaho, the key growing regions, run by fourth- and fifth-generation growers. Some new growers have started cultivating hops in upstate New York and Michigan as well as Colorado, but production levels in the new areas remain low. “We are starting from scratch,” says Steve Miller, a hops specialist promoting production in New York State.