A five-pack of beer apps to find great new brews 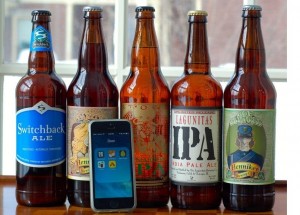 Calling all hop heads, lager hounds and ale wives: put down that pint (just for a moment) and pick up your phone to discover new beers and keep track of your favorites.

I often show up at a friend’s house with a five-pack. I intend to arrive with a six-pack of a new or interesting brew, but my curiosity and thirst often get the better of me. If you are a beer lover always on the hunt for new and interesting ales and lagers, I have a five-pack of beer apps to share with you.

The idea behind this app is simple: snap a photo of your bar’s list of beers and post it for other Beer Boards users to see. It’s like Instagram but only for lists of draught beers. You can browse by nearby establishments or the most recently updated, and you can search by bar name.

Some beer board photos are more legible than others, and the app is more useful the more bars there are in your area. Then again, if Beer Boards doesn’t turn up any local results for you, then it’s up to you to post your own beer boards, giving you and your friends have a good reason to go out and tip back a few pints this weekend.

Beer Boards is free and available for iOS.

If you drink your beer more often from a bottle than from a tap, then bring the Beer Buddy app on your next beer run. The app lets you scan the bar code of beers, bringing you a rating, user reviews and a description. Ratings come courtesy of RateBeer.com, which calls itself the Web’s most complete beer database with more than 300,000 beers on file. You can add your own ratings and notes with the app, which keeps five handy lists for you: Favorites, On Tap/Next to Try, Tasted, My Ratings and Recent Scans.

In addition to providing information about beers you scan, the app can show you the bars, breweries, restaurants and stores nearby that you may want to explore.

Beer Citizen helps you keep track of all of the beers you have tried, letting you rate each brew by appearance, scent, taste and mouthfeel. It provides basic info about a beer, including its brewer, style and ABV, along with user ratings. You can search by beer or brewery to find new beers, or you can browse by beer style or country (but, sadly, not by state within the U.S.). There are also two useful lists to browse, an Active beers list of recently rated beers and a Top beers list.

You will need create an account via Facebook, Twitter, Tumblr, Google or email before you can begin rating beers and adding tasting notes. My favorite part of Beer Citizen is the Similar tab, which recommends beers similar to the one you are viewing. This way, when I can’t get my hands on any Heady Topper, I have other options to pursue.

Beer Citizen is free and available for iOS and Android.

Pintley is a beer-recommendation engine. To get started, you must create an account via Facebook or email. Once you have an account, Pintley asks you to rate a number of beers you may have tried so it can begin to learn your tastes. Based on your ratings, it makes recommendations, and you can build a list of your Favorites and a Wishlist of the beers you don’t want to forget to try.

Pintley has a point system where you earn points by building out your profile and by inviting friends to join. You can also follow other users to see what beers other Pintley people are drinking and rating.

Pintley is free and available for iOS and for Android.

Untappd encourages you to drink socially. After creating an account via Facebook or email, the app lets you rate beers and share your beer opinions with other users as you can with other beer apps.

What I like about Untappd are its lists that show my nearby beers, bars and breweries. I found the lists to be accurate, even for someone like me in northern New England, where the craft-beer scene is smaller than it is in a major metro area. With the app, I have discovered new breweries in nearby Manchester, for example, and learned that one of my favorite beers, Limbo IPA from Long Trail, is available at not one but two restaurants in my town.

Untappd also has a fun and useful Trending Beers list that shows you the beers that are currently the most popular. For any beer you find, Untappd offers a Find It button that will tell you where you can get it (if it’s available in your area) as well as a button to add the beer to your Wishlist (for those beers that aren’t in your area). And on the Details tab for a beer, the app recommends similar beers.

Untapped is free and available for iOS and for Android.

Should you prefer the grape to barley and hops, have a look at three free apps to help you pick the perfect wine. Source: http://www.cnet.com/how-to/three-free-apps-to-help-you-pick-the-perfect-wine/