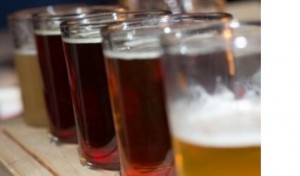 Here is a question you’ve probably never heard from behind the bar: “Excuse me, bartender? Exactly how water-efficient IS that double IPA on tap?”

While I personally ask that two or three times each week, I realize it usually isn’t a top concern for most beer enthusiasts – at least not yet.

Trends, they are a-changing

“Beer drinkers will always choose their beer based upon quality, taste, and local origin,” said Cheri Chastain, sustainability manager at Sierra Nevada Brewing Co. “We focus heavily upon these three topics but we want to add one more cutting-edge issue: environmental sustainability.”

That said, Chastain is beginning to find sustainability is a brand differentiator and beer drinkers are taking notice.

“More and more, we are finding that customers are excited to learn sustainability is a core value for us, and they look for our brand on every beer menu,” she said.

Restaurateurs should take note: beverage sales are an important part of business revenue, with full-service restaurants typically earning between $1,015 and $2,901 per seat, per year for beer and wine combined, according to the National Restaurant Association’s Restaurant Operations Report 2013-2014 edition.

This budding, craft eco-beer crusade is somewhat similar to the booming farm-to-fork movement from a few years ago, and savvy restaurateurs could help boost their beer sales by telling an engrossing eco-story about how the product was made.

Why is sustainable beer important?

Beer is a liquid beverage and is therefore mostly water. Depending upon the agricultural practices, location and technology the brewer is using, it can take 20 gallons of water to make one pint of beer, according to SABMiller and the Chicago Tribune.

The growth of the craft beer industry is affecting water supplies. Just like with restaurants, more than 90% of a beer’s environmental impact results from the agricultural supply chain, according to SABMiller. For drought-stricken California, where 68% of water is used for agriculture and at least 500 breweries operate in the state, the competition for water can have an effect on beer producers.

Due to water constraints, Bear Republic Brewing Co. in Sonoma County, Calif., had to reduce production, minimizing shipments to the East Coast, and Stone Brewing Company in San Diego had to purchase water from the Colorado River, which was much more expensive due to the high demand of H20 in California. Then, because of the higher mineral content in the Colorado River, Stone Brewing Company needed to filter out all the minerals three times over to match California water supplies and protect the beer’s taste consistency, according to All About the Beer magazine.

So, what are breweries doing?

Many brewers are changing their business models to include sustainability. For example, 24 breweries joined the Climate Declaration initiative and pledged to improve their operational efficiency by saving water, energy and reducing their greenhouse gas emissions.

Brewers taking a stand include:

Sierra Nevada, which diverts 99.8% of its solid waste from landfills, recycles CO2 from its fermentation tanks and owns one of the largest private solar power panels in the country.

Hellbender Brewing Co., a microbrew operation in Washington, D.C., that purchased an expensive, but highly efficient mash filter. It requires 15% less grain and 35% less water per batch of beer than standard filters. The company also donates its spent grain to local farmers for animal feed.

Goose Island, out of Chicago, among many other efforts like recycling both CO2 and thin films (like pallet wrap), crafts a Chicago-only, carbon neutral beer called “The Green Line Project” aimed at reducing long-range shipping and bolstering a local following.

MillerCoors, which works with farmers to minimize the footprint of its beers’ raw ingredients barley, hops and wheat. The company saved 440 million gallons of water over three years, the equivalent of water used in one brewery for approximately five months.

How to get in on the eco-beer movement now

Here are five ways to engage staff and sell more eco-beer at your restaurant:

Do a little research: Like any menu item, understand your product. It takes a lot of resources to make and distribute beer, such as energy, water, barley, hops, bottling and transportation.

Purchase product from businesses aligned with your values: Get the scoop from your supplier or directly from the brewer. What sustainability efforts are the brewers most proud of? Get to know their product and what they do to make it greener.

Buy specialty donation beers, or make your own: Some brewers produce interesting beer strains that help support local causes. For example, according to All About the Beer magazine, eight Long Island breweries collaborated to craft Surge Protector Sandy Relief IPA after Hurricane Sandy damaged Barrier Brewing Co. in Oceanside, N.Y. They raised $29,000 to help reopen that brewery and generated an additional $29,000 for a local food bank.

Host a local “Green Drinks” to promote eco-beer networking: New business never hurts and Green Drinks could be a good way to boost a slow Tuesday night. Find a chapter or start your own.

Empower your staff to tell that eco-beer story: We all like stories about the foods we order and choosing a beer is no different. Arm your staff with knowledge. Get them interested in a particular beer by bringing in a local brewer to tell them about it. Encourage them to ask lots of questions and taste some products. Your staff can then impress your customers with their knowledge and talk about specific brewers’ sustainability efforts.

Use these steps to get on the beer-wagon. It might even launch your own business journey toward sustainability. Beer bottle recycling, anyone?