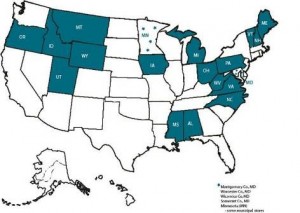 As reported for 2013, 2014’s volumetric growth, although improved, remained soft relative to Control States average growth during the past fifteen years. On the other hand, growth is trending up, which suggests 2015 will be a more robust year than that delivered by 2013 or 2014.

December’s Control State spirits growth was affected, to some extent, by 2014’s calendar:

December, 2013, had five Sundays in contrast to this December’s four. Spirits are not sold on Sundays in six Control States: Alabama, Mississippi, Montana, North Carolina, Utah, and West Virginia.

During December, Irish Whiskey, with 1.0% share of the control states spirits market, was the fastest growing category with 18.8% reported and a twelve month trend of 11.6%. Vodka, with 35% share, grew during the same periods at 7.7% and 2.2%. All categories-Brandy/Cognac, Canadian, Cocktails, Cordials, Domestic Whiskey, Gin, Irish Whiskey, Rum, Scotch, Tequila, and Vodka grew at rates exceeding their twelve-month trends.