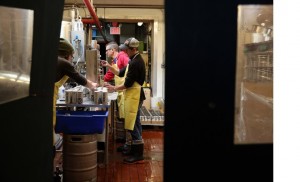 “We remain excited about the future of craft beer and supporting brewers of all sizes in the short and long term,” Mr. Fischer said.

Mr. Metzger, who founded Freetail Brewing Company as a brew pub, spent thousand on new equipment so that he could start canning Soul Doubt, his signature India pale ale; Bat Outta Helles, his Bavarian-style lager; and a number of other brews. Mr. Metzger has had a lot of demand for his brews. Customers are beginning to line up in the early morning for this unique craftThe only unforeseen problem, whcih turned out to be quite a large issue: Where will he get the cans?

The Craft beer boom has benefited small breweries around the country. However, there have been growing pains, such as leaving breweries left scrambling for cans, especially 16 oz sizes. This adds to the craft feel as it distinguishes them from mass produced beer products, like Budweiser and Coors, which use 12-ounce cans.

Currently, there are more affordable ways of canning that have helped craft breweries, including mobile canners. And even though glass bottles still hold more cachet among craft brewers, funky, unique can designs became a popular way to court the young beer enthusiasts that have increased sales.

“Cans are much more accepted on the market now,” said Paul Halayko, the co-owner and president of the Newburgh Brewing Company in New York. “I think for a very long time, people thought that beer should be in a bottle.”

In the past, smaller breweries and their distributors that needed only a few thousand cans at a given time worked with Crown, a major manufacturer. It required a much smaller minimum order than two of its main competitors, Ball and Rexam. Enourmous demand required they raise its minimum order to roughly 155,000.

“We remain excited about the future of craft beer and supporting brewers of all sizes in the short and long term,” Mr. Fischer said.

“Craft brewers are often compared to chefs: They tinker with recipes, experiment with flavors and appeal to a niche market that likes the authenticity associated with beers that seem only a few steps removed from being brewed in someone’s basement”.

There is continued excitement about the growth of the Craft movement. The industry has grown to a double-digit clip over the last six years, and makes up more than 10 percent of all beer sold in the United States, according to Vivien Azer.