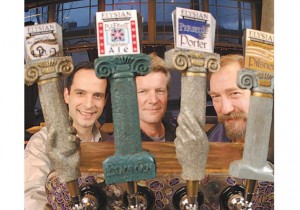 Brewery takeovers are now a fact of life in craft beer.

When Anheuser-Busch InBev BUD, -0.31%  announced last week it was buying 20-year-old Seattle brewer Elysian Brewing, craft beer’s most fervent advocates just had nothing left to give. Fans of small, upstart U.S. breweries and their myriad styles have watched their numbers grow from a little more than 1,650 at the end of 2009 to roughly 3,400 by the end of 2014. Last year, craft’s 16.1 million barrels of production eclipsed the 16 million barrels of Budweiser produced for U.S. consumption that same year.

As craft beer sales continued to grow while Anheuser-Busch InBev and its Budweiser, Bud Light and other light lager brands’ sales fizzled – and the overall U.S. beer market shrank after the recession (by 1.9% in 2013 alone) – there were questions about what A-B would do next. That led craft beer fans through the five stages of the Kubler-Ross model of grief.

“Throughout our journey we’ve been focused on brewing a portfolio of both classic and ground-breaking beers and supporting innovation and camaraderie in the beer industry through collaboration and experimentation. By joining with Anheuser-Busch, we’ll be able to take the next steps to bring that energy and commitment to a larger audience.”

Instead of threatening to boycott the brewery he built or to string him up from the Space Needle, the city has his back. Though concerned about A-B’s presence, Matt Lincecum, founder and brewmaster for neighboring Fremont Brewing Co. in Seattle, tells the Puget Sound Business Journal that “anyone who says Dick sold us out needs to think twice.” New Belgium Brewing Co. in Fort Collins, Colo., which has worked with Elysian on the Trip series of collaborative beers for several years, told The Full Pint beer blog that “we consider co-founder Dick Cantwell a member of the New Belgium family. We wish the folks at Elysian every success going forward.”

Beer bloggers themselves, who wailed about the sky falling just a few months earlier during the 10 Barrel buyout, took a broader view with Elysian. Berlin-based beer writer Joe Stange, in a piece written for Draft Magazine, notes that beer drinkers “all vote for what we like. It’s worth noting that a lot of people still vote for AB InBev, which enjoys more than 47% of the U.S. market – although it appears to be losing share faster than it can buy it.” From inside Seattle itself, Washington Beer Blog author Kendall Jones offers the following bit of perspective: “There are 3,400 [craft] breweries in the country. That’s still 3,396 that Anheuser-Busch does not own.”

There are legitimate concerns among small brewers about Anheuser-Busch InBev and its sprawling distribution system, its access to resources including the largest-in-the-world Elk Mountain hop farm in Idaho and its lower pricing. Those concerns would have existed even if A-B hadn’t bought Elysian, and they’ll continue to exist far beyond A-B’s next acquisitions. Craft beer sales grew 18% by volume during the first six months of 2014 and 17% for the entire year before that. Breweries are opening at a rate of 1.5 per day and IPA, the hoppy style that makes up 21% of all craft beer sales, is still dominated by Sierra Nevada, Lagunitas and Samuel Adams – brands that A-B doesn’t own and likely can’t buy.

Elysian is out of the craft beer fold now, but craft beer isn’t doomed even if sentimental Seattleites want just one more six-pack of Split Shot. As Seattle saw after Anheuser-Busch took a 25% stake in hometown Redhook in 1994, a year before Elysian opened shop, the void eventually fills. Life and craft beer go on.

If you’re going to keep a rodent in your Brooklyn apartment by choice, at least train it to bring you beer.

Meanwhile, if you’re in Portland and are bummed that you’re missing all of the kind of gross beer fun your friends are having across the country in Brooklyn, you can sleep soundly knowing that your local homebrewers will be brewing with treated sewage.