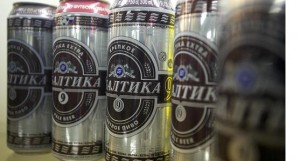 Russia has long proved to be a problem for the world’s fourth-largest brewer, almost since it decided in 2008 to take full ownership of Baltika, which is the biggest beer brand in Russia and across Europe.

A mixture of a regulatory clampdown, increased taxes, a weakening economy and the plunging rouble has meant Russia has cast a shadow over Carlsberg’s results for several years. The brewer issued two profit warnings last year due to Russian woes.

The closures of the breweries in central Russia – in Chelyabinsk and Krasnoyarsk – will lead to a pre-tax, non-cash writedown of DKr700m ($106m) and will have no effect on last year’s operating profit or adjusted net result, Carlsberg said.

The Russian beer market has declined by about a quarter since 2008 and Carlsberg had already suspended production at the two breweries and warned of likely job losses.

Jørgen Buhl Rasmussen, Carlsberg’s chief executive, told the Financial Times recently that he remained committed to Russia and believed, despite the consistent problems over the past few years, that the brewer would enjoy long-term growth in the country.

He underlined that Russia remained profitable, saying in November: “Pulling out is not on our agenda at all. This is a very important contributor to Carlsberg?.?.?.?Even Ukraine is contributing quite nicely to Carlsberg’s business and profitability, and I think in any developing market you have to expect, sometimes, some ups and downs. You take a little more risk?.?.?.?but the opportunities are a lot bigger.”

Few companies have taken such a large bet on a single emerging market as Carlsberg has in Russia and it has paid for it on the stock market. Its shares have fallen by more than 10 per cent in the past year, compared with a gain of more than 30 per cent for Heineken, the Dutch brewer. In the past five years, Carlsberg’s shares have risen by a fifth against a more than doubling for the Copenhagen stock exchange.

Beer consumption in Russia has slipped from 80 litres per capita a few years ago – close to the European average – to 55 litres as a series of sharp tax increases, advertising bans and restrictions crimped sales.

Carlsberg, which reports full-year results on February 18, posted operating profits in eastern Europe of DKr3bn in the first nine months on sales of DKr13.7bn.