Alcohol Battles Brewing in the States 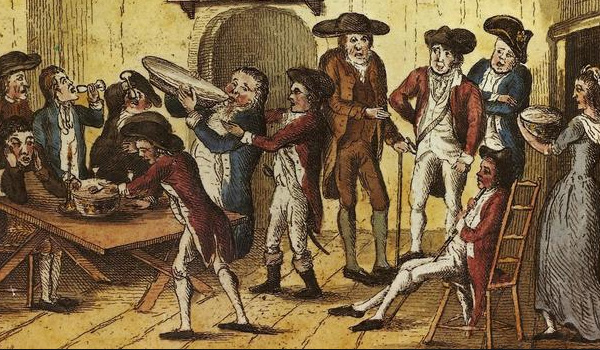 At least six states are taking aim at the country’s byzantine patchwork of state laws governing the sale of alcohol.

As any out-of-towner knows who has attempted to buy wine in a New York City convenience store only to unwittingly purchase the awful “wine product” Chateau Diana, laws governing the sale of alcohol can seem bafflingly arbitrary. In New York, where wine and beer cannot be sold on the same premises, it doesn’t look like Trader Joe’s will be tearing down the wall between its wine shop and grocery store any time soon.

Elsewhere in the nation though, from Maine to Florida, restrictions on alcohol are being challenged in state legislatures this year, driven in part by the burgeoning popularity of the craft-beer movement.

In Florida, Republican state senators have proposed measures this legislative session that aim to ease up on some of the rules currently hampering the state’s small-batch brewers. One bill would legalize the sale of 64-ounce growlers – containers filled straight from the tap, sealed and sold to customers – as is allowed in 47 other states. Florida at the moment permits the sale of 32-ounce bottles, but that’s not the industry standard. Another bill would allow licensed beer retailers to offer free tastings, as is legal for stores selling liquor and wine. The large beer distributors in the state are unhappy to see their market dominance challenged and will put up a fight.

A proposed law that was voted down last week in New Hampshire would have done away with the current requirement that all stores that sell beer also stock at least $3,000 worth of food. “If the bill were to pass, it could open the door for boutique-type beer stores that could cater to our smaller, yet growing, beer industry across the state,” Republican state representative Pamela Tucker said, before the bill was killed on a 163 to 142 vote.

Democratic representative Ed Butler insisted that the law was worth keeping because “the sale of food at stores with beer and wine hopefully encourages consumers to enjoy one with the other.” As the New Hampshire Union Leader editorialized, the assumption seems to be “that people who buy beer in bottles and cans have no food at home with which to enjoy their alcoholic beverages.”

Pennsylvania, which maintains a state monopoly on the sale of all types of alcohol, is infamous for the hoops it makes retailers and consumers jump through. It’s not possible to purchase wine and beer in the same location, and the only way to pick up a six-pack as opposed to an entire case of beer (the only thing typically on offer at the state-run beer distributors), is to swing by a restaurant or deli, which take advantage of “eating place malt licenses” to sell beer to go. Grocery stores in Pennsylvania have taken to attaching sit-down restaurants to their buildings so that they can do the same.

Legislative attempts to move toward privatization, as recently as last summer, have been unsuccessful in large part because the state-run stores are staffed by unionized employees who benefit from the status quo. Nevertheless, Republican governor Tom Corbett called last month in his state-of-the-state address for another go, and some legislators are prepared to take up the challenge.

“Let’s make 2014 ‘last call’ for state-controlled liquor in Pennsylvania,” Corbett said. “We have to reform our antiquated system of state-owned liquor stores. Visitors often wonder about it – unless they’re from Utah.”

In Utah, liquor restrictions are a live issue for different reasons. A majority of residents belong to the Church of Jesus Christ of Latter-Day Saints, which teaches its members not to consume alcohol. Beehive State lawmakers are in the midst of a heated debate about whether to tear down the “Zion curtain.” That’s the barrier, often a frosted-glass panel, behind which bartenders in restaurants are required to go to mix drinks or uncork beer for customers, so as not to expose children to the act of alcohol being dispensed. The 2009 law requiring the barriers exempted restaurants that opened prior to January 2010, so proponents of the bill to undo the law argue that the current rules unfairly disadvantage new businesses, in addition to alienating tourists.

Maine liquor regulators this year started cracking down on bars for displaying the alcoholic content of different beers, a practice that is prohibited in a post-Prohibition 1937 law that’s still on the books. The idea behind the law was to keep advertisers from making high alcohol content a selling point, but with the rising popularity of craft beers, which include a variety of more potent brews, it’s a common and seemingly commonsense practice to post alcohol content. Democratic state representative Louis Luchini is working on legislation to address the issue, but in the meantime, bar owners and brewers are unsure what the law requires of them.

Alcohol-content levels are at the center of a battle over beer in Tennessee, where there’s a movement being led by the Craft Brewers Guild to “Fix the Beer Cap.” Any beer exceeding 5 percent alcohol content in the state is classified as “high-gravity” beer and is subject to the same sales restrictions as liquor, which can only be sold in state-licensed stores. Even if a measure on the ballot in Tennessee this fall to allow wine to be sold in grocery stores is approved (an idea favored by 66 percent of respondents in a recent Vanderbilt University poll), the cap means that some beers with half the potency of wine would still be verboten in supermarkets.

“I know there are a lot of consumers who want to purchase Chimay, Delirium Tremens, and they want to be able to able to get it with the convenience of a grocery store,” said Republican state senator Brian Kelsey, who favors raising the cap. He and other state legislators have hit on one issue, at least, that can unite Republicans and hipsters.